The building has been inaugurated in June 2009 with laboratories opened in the Fall 2009, and has obtained authorisation to start experiments including a few grams of depleted uranium and natural thorium in January 2010. Last take-off was from our theory group, who started in October 2009.

However, "Institut de Chimie Séparative de Marcoule" unit already existed as a team scattered in several places in France since 2007. Scientific activity began in the Fall of 2007 with progressive joining of ICSM of team leaders, co-workers, technicians and students, today with 44 permanent staff and 46 non-permanent scientists (post-docs and students). Also, about 20 master students join the 8 teams for a few months every year.

Resources in Uranium are scarce, if only the 235 isotope is used and wastes related to nuclear energy production are potentially dangerous. The use of fast neutrons allows to multiply existing resources in national independence, but will be based on new separation processes, that can be modelled using predictive theory. Understanding and optimizing separation in the nuclear fuel cycle is the main motivation of ICSM. Enlarging this central goal to the needs for recycling chemistry, e.g. strategic metals for alternative energy, is the natural extension surfaces of needs and development of science, with a strong link for technology and implementation with our 600 colleagues from the Departments in Marcoule, as well as the chemists from the "Pôle de Chimie Balard du Languedoc-Roussillon". 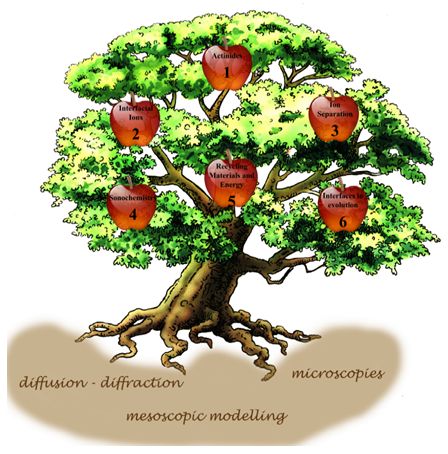 A report (Part 1, 2 and 3) that can be downloaded gives an overview of the work published and submitted since January 2009. The nine active research teams still work in the direction of the scientific open questions as defined and published by the French academy in 2007. Separation chemistry, a branch of physical chemistry, is a key part of the "green chemistry". The science required is the emerging "Nanoscience" as defined by Bernard Bigot, the Haut-Commissaire à l’Energie Atomique at the launching of the ICSM as a project in July 2004.

In the same field: