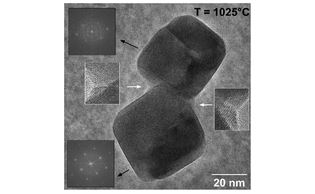 Two-grain model systems formed by ThO2 nanospheres have been used to experimentally study for the first time the initial stage of sintering from room temperature to 1050 °C using high temperature high resolution transmission electron microscopy. In each grain, oriented attachment drove the reorganization and growth of the crystallites up to 300 °C to form a pseudo single crystal. Crystallite size kept growing up to 950 °C. At this temperature, a fast transformation probably corresponding to the elimination of stacking faults or dislocation walls led to the formation of single-crystals. The contact formed at room temperature between the two grains was stabilized during heat treatment by a slight reorientation of the crystallographic planes (T ≈ 400 °C), leading the neck to be formed by numerous boundaries between the crystallites. At higher temperatures, the neck evolved and stabilized in the form of a plane of crystallographic orientation mismatch between the grains, which corresponds to the usual definition of the grain boundary. The growth of the neck by the addition of atomic columns was further observed in real time and quantified. At T = 950 °C, the evolution of the microscopic sintering parameter λ was obtained from HT-HRTEM images and indicated that the neck formation mostly proceeded through volume diffusion.